Bloomberg: How Does Your 401(k) Compare?

A new survey looks at trends in fees and investment options—and shows there’s lots of room for improvement.

For years, fees on investments in workplace retirement savings plans have been falling. Now they’re stalling.

The average expense ratio on investments in defined-contribution, or 401(k), plans dropped by a hair to 0.41 percent of assets this year, according to the latest annual survey from investment consulting firm NEPC. That follows three straight years of somewhat deeper declines, spurred in large part by regulatory pressure and a rash of high-profile class action lawsuits alleging excessive fees and plan designs that weren’t in savers’ best interests.

The all-in cost of plans, including fees tied to investment management, record-keeping, and trust and custody services, have also been dropping in recent years.  In the latest survey, it flattened out at 0.43 percent, the same amount as in 2016. 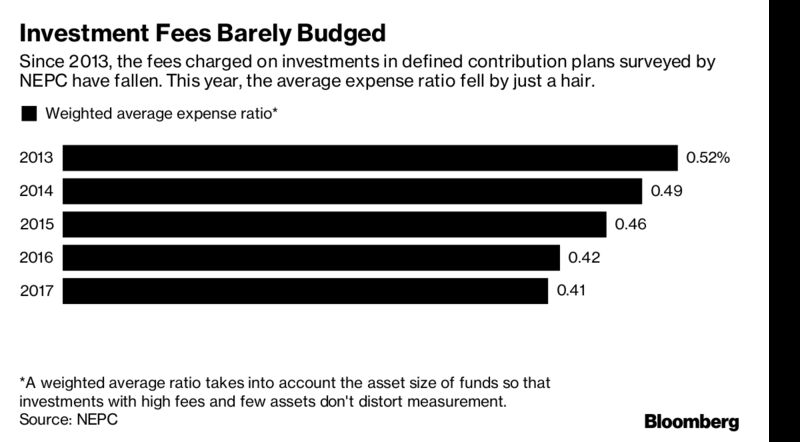 “This may be a temporary break in the trend,” said Ross Bremen, a partner and defined-contribution strategist at NEPC. Many employers are searching for new record keepers this year, and that often means negotiating on costs, so “fees will likely be lower again next year,” he said.

Just over a third of the 123 defined-contribution plans surveyed, which represent $138 billion in total assets, reported that they had been able to get a lower fee for at least one of the investments offered in their 2016 lineups.  Eleven percent of the plans added an index fund option last year.

That weighted-average expense ratio of 0.41 percent means many investors are paying more than 0.41 percent, at a time when many index funds charge investors next to nothing. (The average expense ratio is weighted by the asset size of funds so that funds with few assets and high fees don’t skew the ratios.) For example, mom-and-pop investors without the negotiating leverage of a company plan can pay 0.04 percent to invest $10,000 in the Vanguard Total Stock Market Index Fund. Over 30 years, the difference between 0.04 percent and 0.41 percent is considerable.

While much of the investment world has gravitated toward lower-cost, passively managed index funds, a lot of the older money in 401(k) plans remains in actively managed funds.

A lot of the newer money is in target-date funds (TDFs), since these diversified funds, which adjust asset allocation according to an investor’s years to retirement, are the default investment option for most plans. The survey found assets in target-date funds at an all-time high for the 12 years it has been done, at 34 percent of assets.

Administrative fees also took a break from the steady decline. In recent years, more 401(k) plans have moved to record-keeping contracts that charge by the participant, a more transparent fee arrangement than many plans had earlier. The survey found that the median per-head amount has risen to $59, from $57 last year. Until this year, the per-head amount had dropped every year since 2010, when it was $103. 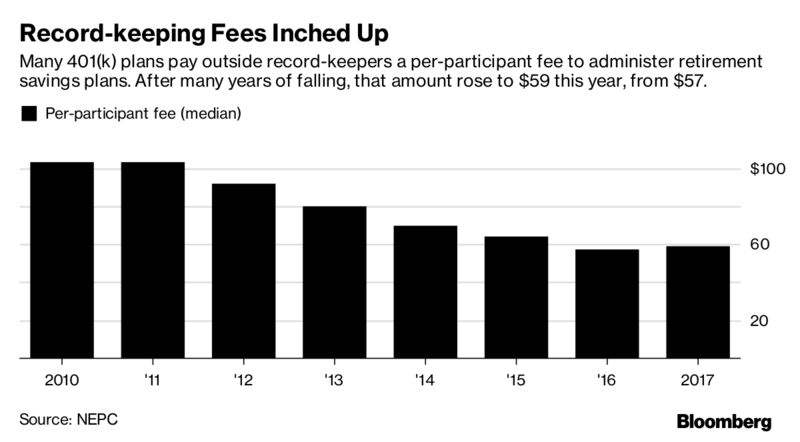 As profit margins for record-keeping businesses shrink, other fees tend to crop up in the mix.

“It’s a little like squeezing a balloon,” Bremen said. “As record-keeping fees come down, you see managed-account fees, loan fees, brokerages fees go up.  It’s a little bit of a game.”

Managed accounts, which offer a more personalized investment strategy than you see in, say, a target-date fund, for a higher fee, are offered by 28 percent of the plans surveyed, up from 16 percent in 2013. But since the usual behavior by plan participants is inertia, “so far they haven’t proved to be a magic bullet,” Bremen said.